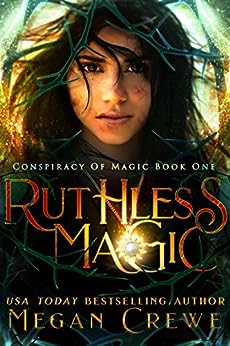 a bit like hunger games meets harry potter, ruthless magic has a group of outcast magicians competing to become champions in order to retain their right to use magic. among them finn lockwood, who gives up his secure future because he realizes that the only reason he has that chance is because of his family name and not because he's earned it. then there is rocío lópez, who is a more talented and powerful magician than most, but because of her family's ancestry is considered a risk. there's also desmond, a magician with poor sight; prisha, finn's best friend, whose family competitiveness leaves her with no other option but to succeed; and more.

we get to know all the individual competitors both from finn and rocío's point of view. and they go through some serious trials as the examination tests the limits of their magic and their willingness to do anything to keep it.

i'm not sure if this is a series, because the way this ends is kind of open-ended, but it could also just be done. if it is the end, though, i feel like finn gets short-shrifted at the end. we should have seen him get his actual results not just see what he says to rocío. that part felt very unsatisfying to me. finn was challenging the order of things, and i just can't believe that it ends for him the way it does.

i enjoyed this but was left kind of frustrated by the ending i guess.

**ruthless magic will publish on may 30, 2018. i received an advance reader copy courtesy of netgalley/another world press in exchange for my honest review.