something from the archives: another sunset - part 8 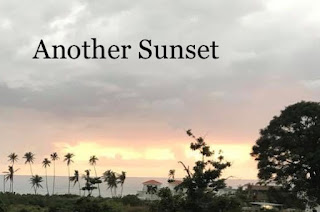 Have you ever seen anything grind conversation to a halt? That one moment when everything is good, and everyone’s laughing and just glad to be spending time with others, and the next moment when all of that is lost. It’s probably the most uncomfortable feeling in the world.

The ringing sound of the doorbell cut through the laughter and camaraderie in the room.

The story Michael and Kyle were telling of their first meeting trailed into a stilted silence as Alex stood to answer the door.

Alex opened the door and quickly drew Max into the kitchen.

“Lower your voice a second. Listen. I don’t want her agitated. She does not know you as a boyfriend. So for now you only know her because you’re her friend.”

“That really blows Alex. I love her. Why can’t I show her that?”

“You don’t know her. Elizabeth and Liz aren’t the same person. God, Max. Just do this for her.”

“So someone else gets to play the boyfriend? How the hell is that fair?”

“Fuck you Max. God. I’ve lost my entire family. My life will never be normal. Ever. Where the hell do you get off? I don’t want you to stay.”

“You heard me. You’ll stop in, introduce yourself to Elizabeth, and you will leave. Immediately. Don’t bother calling. She doesn’t want to hear from you. And quite frankly I have no desire to hear your voice.”

“Alex, what the hell has gotten into you?”

“Max, you’re a selfish little bastard. I’ve heard rumors about you and other girls, but have always given you the benefit of the doubt. But frankly, I’m glad Elizabeth doesn’t remember you. You were a pretty shitty boyfriend and I know you’re a shoddy human being. Now enough chitchat let’s get this over with.”

Max was stunned into silence. Alex’s anger was palpable. He walked into the room his movements forced and unusually stiff. Maria watched him carefully, she knew her boyfriend had reached the end of his tether, and she could only hope that whatever was to happen next wouldn’t cause him to break down. He was barely holding it together.

“Elizabeth, Michael. This is Isabel’s brother Max. Max, meet Elizabeth and Michael.” Before anyone else could get a word in edgewise, Alex continued.

“I just noticed the hour. It’s really late and tomorrow we have the memorial service for my parents. I do hope you all can attend.”

“Of course Alex, we’ll be there. Do you want Kyle and me to take Maria home for you?”

“No, thanks, Isabel. I need to spend some time with my girl.”

Isabel enveloped Alex in a warm hug, nodded to Liz and Michael while propelling Max to the door. Kyle followed behind Isabel, shaking hands with Liz and Michael.

“I’ll see you later man. Bring her home in one piece. Amy’s been psycho about cars lately.”

“Yeah. Babe, we should go. God knows I don’t want your mom to flip. You guys don’t mind if I leave you alone for a bit.” Alex spoke to Michael and Liz while grabbing his coat and keys. Michael and Liz nodded in response, watching with amazement at how quickly everyone cleared out of the room.

“You don’t think we had cooties, Michael?” Liz asked jokingly. Something else had just happened there, only she couldn’t figure out what it was, or why she knew that the others were all hiding something.

“Nah. Maybe Max did though. He sure knew how to spoil the mood.” Michael replied, not really knowing why he felt so antagonistic towards him. Although he was pretty sure that was the boyfriend, he couldn’t help be happy that he was gone.

“Yeah, that was weird. Do you know him at all?”

“Nope. I barely even know Isabel. Max seems like he’s more your age.”

“Are you going to go to the thing…the funeral tomorrow?”

“I was just wondering if I should.”

“Listen to me. You may not remember these people, but they loved you, and I know because this place…it’s full of love. And while you shouldn’t go because you owe it to them or because you’re worried about what others may think or even because you feel like we’re making you go. Elizabeth, you will regret it if you don’t go for yourself.”

“That people are going to be mad because I’m not sad enough.”

“If there are people there who are paying more attention to what you are doing and how you are reacting than paying tribute to two people who died tragically, then those people aren’t even worth your consideration.”

Liz looked so fragile, so lost. Michael just wanted to envelop her in is arms and promise her that everything would be okay.

“Come on. You got to get some rest. Can you make it to your room okay?”

Liz stood up, nodding. Michael watched her carefully as she took small controlled steps to her bedroom, sweeping her into his arms when she faltered. He laid her on her bed, reaching for her medication and the pitcher of water on her nightstand. He made sure she swallowed the colorful assortment of pills the pharmacy had provided. When she winced as she reached for her brush, Michael took it from her and gently brushed her hair, stifling his groan at its silken texture. He lay out her pajamas and didn’t resist the urge to press a kiss on her forehead.

“I’m in the next room. Call me if you need anything. Doesn’t matter the time. Promise.”

“Okay. Thank you, Michael. Not just for this but for everything.”

Liz looked at him with a gaze filled with sorrow and loss. He could barely resist the impulse to hold her in his arms. He never wanted to spend a night far from her. That thought alone was enough to propel him out of her room and into his own, where he studiously avoided dreaming of her.

“Max, what the hell did you say to Alex?”

“Don’t give me that. God. I’ve never seen him that angry in all the time I’ve known him.
“If you hurt them any more than you already have, man. I don’t care if I am dating your sister I will kick your ass from here to China.”

“What the hell is your problem? I didn’t say anything to Alex. He’s just all weird.”

“Wouldn’t you be weird if Mom and Dad died and I didn’t remember anything about you? God. Be considerate. For one second just think about someone else for a change.”

“I don’t have to listen to this. I’ll see you when you get home.”

Kyle and Isabel watched as Max slammed into his car and sped off. Kyle wrapped his arms around Isabel's waist and just held her as she leaned back into him.

“Honey, you’re not your brother’s keeper. He’ll have to make all this right on his own.”

“What happened back there?”

“With Max, what happened?”

“Nothing. He was just insensitive.”

“You never liked him.”

“Yeah. Well, he’s selfish. And he’s never treated Lizzie right. She’s my baby sister; she’s all the family I have left. I don’t want her hurt by him again.”

“Okay. Alex, why aren’t you worried about Michael?”

“I mean you barely know this guy and he moves in with you and is spending all this time with Liz, why aren’t you worried?”

“I know this will sound crazy Maria. But he loves her. He’d never hurt her.”

“Watch them together. It’s obvious.”

“Aren’t you afraid that he’ll take advantage of her?”

“Nah. He’s the decent type. Until he can trust in her feelings he won’t make a move.”

“And what’s to keep that from happening?”

“Maria, she can’t remember anything. He can’t trust how she feels until then, or until it’s obvious that she’ll never remember. And he’s a good guy.”

“I guess I always liked him best of Kyle’s friends.”

“Humph. Should I be worried about another señorita?”

“Nope. This señorita’s heart is all yours.”

With those words, Alex and Maria kissed each other good night. Sharing the love and tenderness that lay between them with one another.