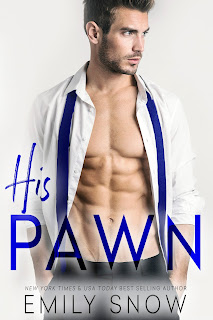 senator graham delaney is the youngest (and hottest) senator in d.c. when he sees eleanor courtney at a bar early on in his pawn he decides to pursue her for less than honorable reasons. his longtime rival in the senate is elle's father. so he makes her an offer she can't refuse.

not just the money. because he intrigues her. she's crazy attracted to not just his body, but the power he wields with it. and what follows is a battle of wills for control, for the upper hand. and the stakes get higher the more their lives become entangled.

when all cards are left out on the table, the end result is that what started out as a cold-blooded arrangement has more heat and feeling and love than either graham or elle could have anticipated.

**his pawn published on may 3, 2018. i received an advance reader copy courtesy of candi kane pr/emily snow in exchange for my honest review. keep reading for more detail on the book. 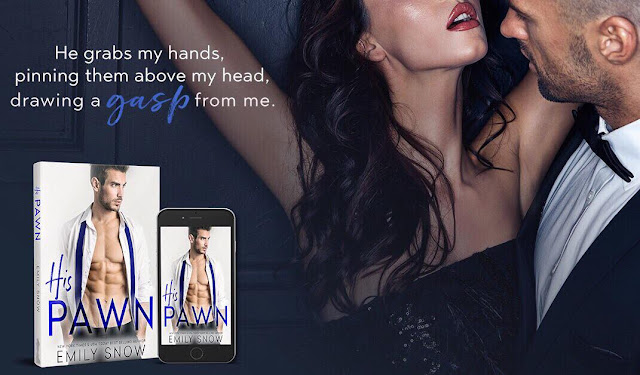 "I want to spend your last semester getting you out of those pearls and on all fours."

That's what he said when he discovered that, with five months of college left, I was cut off. Young, wickedly handsome, and politically incorrect, he was unlike any man I ever met. And his proposition to cover my tuition in exchange for a semester of “anything goes” was offensive and thrilling.

If you’re wondering if I told him off—if the night ended with me slapping that delicious smirk right off his face—that didn’t happen.

Instead, I decided to be practical.

My name is Eleanor Courtney, and I'm the first to admit my mistakes. Agreeing to crawl into bed with the devil in a designer suit might be my biggest ever. Because he said something else to me that night:

“I don’t want to sleep with you, Elle, that would be too easy. I want to possess you.”

And Senator Graham Delaney—well, he always gets exactly what he wants.

*Disclaimer: A small portion of this 85,000 word standalone was previously published as Maya St James.

“You know, you talk about sex so much it makes me question if you’re one of those all talk, lame action situations.”

“May I?” He extends his hand, gesturing for mine. Warily, I place my fingers in his and release a yelp when he pulls it under the table, pressing my palm against his zipper. He closes my fingers, one by one, around the unquestionable—and admittedly very, very impressive—bulge.

“That’s not hard either,” he informs me in a low voice, “but if you’re doubtful of my ability to make you forget your fucking name, how to walk, how to eat—and everything else but yes, please, and more—it won’t take long for you to get me there.”

“So that’s why you invited me to dinner, huh?” I snatch my fingers back and grab a handful of my dress to ease the electricity under my skin. It doesn’t help, and I’ve got a feeling I’ll be undone for the rest of the night all thanks to what’s hidden under Graham’s zipper. “To screw me? I guess I had you all wrong.”

“If I wanted only to fuck you, Elle, it wouldn’t have mattered where I took you for dinner—or if I fed you at all.” He whips the plate cover off my food. “Hope you like steak.”