simply all about the royal wedding

By eva May 19, 2018
truth time: i'm just enough older than wills and harry to have never fantasized about marrying either of them. but they aren't that much younger either. and i've always followed the royal family happenings with interest.

when will and kate got married i stalked all the things about their wedding. and with harry and meghan it's been pretty much the same. and now today was the big day and i have some thoughts y'all. 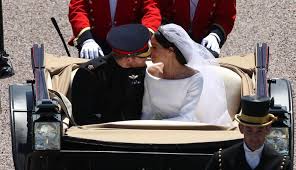 first one of my favorite things about harry and meghan as a couple is that they have not hidden how infatuated with each other they are. when he looks at her, when she looks at him, you feel the sexual connection between them viscerally. it's crazy hot. it's swoonworthy because we all fantasize about a man (or woman or person whatever is your jam) looking at us like that. she is the only person in the room for him. and he's it for her. and i was genuinely thrilled for them on their wedding day even though these peaple are almost like fictional characters for me.

i have to say i thought that most people looked good. unfortunately, though meghan's make up was exquisite, the fit of her dress was a disaster. like okay maybe she was aiming to go for super different from kate's dress. and i like the idea and concept behind the dress. i'm just not in love with the execution. a structured, simple dress needed to fit perfectly. and this dress did not.

from the neckline up, meghan markle looked fantastic. but the dress material was unforgiving and super crinkly and it was just too big along the torso and the arms, the poor fit impacting the dress's movement. in pictures it doesn't seem as badly fitted as it is.


but i just don't love it. however, these two crazy kids are clearly super hot for each other and care not at all what i think. so it's all good. i think they're going to go practice making babies.