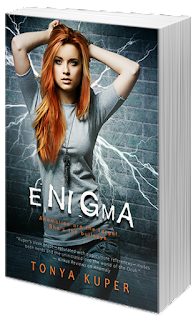 and in enigma it's going to take all those reserves to battle the mole that is destroying the oculi world from within. it's not just josie and her family that are in danger, it's the entire oculi world. and the problem is that it's impossible to know who to trust, especially since oculi have the ability to shift heir appearance with a push of their thoughts.

and if all that weren't problematic enough, she also has to hide her relationship with reid. especially given that trainers are not supposed to get involved with their trainees. except she has no one else she can really trust. and it's already hard enough to trust him. so staying away from him isn't really the answer. and given that leadership is understandably occupied with other matters, like figuring out the threats to their very existence, maybe they can keep their relationship under the radar.

eventually everything will get blown up out into the open. who the mole is. what they've done. what the plan is. the truth about josie and reid. only some of those things are world changing.

at the end of the day, all they want is the chance for some normal. even for people with extraordinary abilities, sometimes normal is all you need.

**enigma will publish on july 3, 2017. i received an advance reader copy courtesy of netgalley/entangled publishing (entangled teen) in exchange for my honest review. read on for more information on enigma.

Escaping with Reid Wentworth should have been fun, but how can I enjoy it when I just (accidentally) killed someone, my mom and brother are in danger, and the Consortium is trying to enslave humanity? (Yeah, they aren’t fooling around.) So feeling something for Reid Wentworth was not part of the plan. Trying to help unite the Resistance against the Consortium means I can’t be distracted by hot boys.

The Resistance secret hideout isn’t exactly the rebel base of my dreams. A traitor there wants me dead, but we have no idea who it is. And with both the Resistance and the Consortium trying to control me, the only one I can trust is Reid. If we’re going to have any chance of protecting my family, controlling my unstable powers, and surviving the clash between the Oculi factions, I’m going to have to catch this traitor. By using myself as bait. 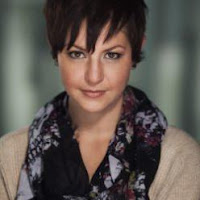 Tonya Kuper is the author of Anomaly, the first in the Schrodinger's Consortium Series, a young adult science fiction duology, released November 4, 2014 by Entangled Teen. She fell for Young Adult lit while earning her Masters degree in Reading Education. She's a mom of two awesome boys, an alt music junkie, a Star Wars nerd, and in love with Sherlock Holmes.