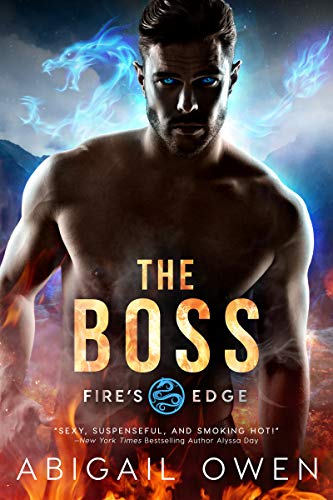 the first book in the fire's edge series, the boss finds crew chief finn conleth trying to figure out why fires have been chasing delaney hamilton. across the country. especially since they seem to be dragon-made and not natural fires.

finn's crew are the huracán enforcers, a coalition of specialist dragons who are in charge of keeping humans safe from dragon-created fires and hunting down rogue dragons and ensuring that justice is served if they've caused harm.

finn finds himself incredibly attracted to delaney but he refuses to act on this. he's been haunted by the death of the woman he'd thought he was mated to and can't bear to put another woman at risk. delaney doesn't even bear the markers of a potential dragon mate so his unnatural possessiveness and desire for her makes no sense.

soon they determine that delaney is being stalked by a dragon convinced she is his mate. but it makes no sense, identifying dragon mates has been a long-established process and it seems impossible for delaney to be one, and yet the only reason to explain why all of this is happening to her.

finn needs to figure out if he can let go of his past, of his fears and find a way to make things work with delaney. given how possessive he feels and how much he wants her, there is no other option.

this is an enjoyable start to a dragon shifter series, i look forward to future installments with the huracán enforcers.

**the boss will publish on september 24, 2018. i received an advance reader copy courtesy of netgalley/entangled publishing (amara) in exchange for my honest review.