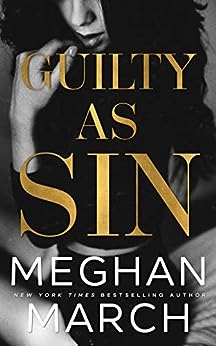 the sin trilogy continues with guilty as sin and the twists and turns keep coming for whitney and lincoln. as with richer than sin the story unfolds in both the present and the past.

the family issues that mired lincoln and whitney in drama ten years ago are just as prevalent in the present day and you wonder if they will ever be able to rise above it. what makes this couple so compelling is the crazy amount of history they share. it's not just the history of them as a couple, it's the history of their families, the history of their town. the stakes aren't just about whether or not whitney and lincoln can find a way to be together, it's whether being together, getting that happily ever after is really in the cards for them.

because the deck is stacked against them. and they aren't dealing the cards.

but the kind of love these two have is epic, life-shattering, and unbreakable. their connection should have been broken by their pasts. both lincoln and whitney have changed from the lovesick kids they were when they first found love. they're still changing because as every bombshell revelation comes to light, they need to adjust their thinking to take in their new reality.

and none of it matters.

a gable and a rischoff should never be together.

but whoever said that never met lincoln and whitney. that magnetic pull between them is impossible to deny.

whitney and lincoln belong together, only...we're going to have to read reveling in sin to see if they can get there.

**guilty as sin will publish on september 18, 2018. i received an advance reader copy courtesy of meghan march in exchange for my honest review.