seriously romantic: any boy but you by julie hammerle

oh look, it's my stop on the chapter by chapter blog tour for any boy but you. you can refresh your memory of the book at my previous post or at the publisher's page and read below for my review. spoiler alert: i liked this one.

the princes and the chestnuts have two things in common. sporting goods stores and a mutual dislike for one another and their entire families. oliver prince and elena chestnut have both been brought up in the family tradition of mutual dislike and would gladly continue it, if it were not for the fact that oliver needs some help bringing up his latin grade and elena is trying to make some extra cash by tutoring since her family's sporting goods store is failing. 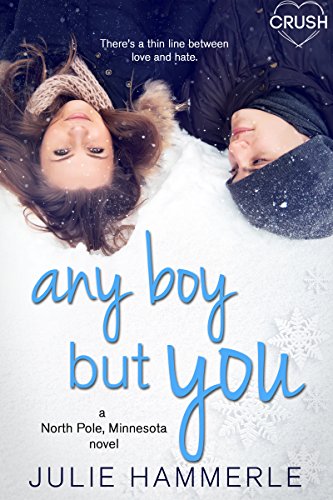 she'll take the princes' cash, but she'll still gladly blame them for her family's current misfortunes, even if it's not really fair. the chestnut's store had ben suffering for a while. both stores had been actually, since they were facing greater competition from larger chain stores. and while north pole, minnesota is sort of a tourist destination given the town's ridiculous name, the truth is most people don't think much of the north pole when it's not christmastime.

in all honesty, oliver isn't a sporting goods kind of guy. it's the dead of winter, and growing up in florida didn't give him the chance to beef up his winter sports skills. at his heart, oliver is a computer programmer with mad skills. and to help his dad out he's created an app that will hopefully help drive up the store's business and will look good on his résumé. of course, when his mom busts him on his antisocial behavior and sets him up with elena as a latin tutor while also banning him from his laptop the day after the app launches, he's more than bummed out.

and so both elena and oliver are not in the best of moods when they are forced to interact with each other. neither of them has any intention of playing oliver's app game either. oliver because his original intention was to be on the lookout for bugs, but since his electronic device ban does not include his phone, and playing the app is the only way he can interact with his baby, he gives it a whirl. it's also his way of checking on his twin sister's managing of the app while he's out of commission. meanwhile, elena gives in when the prize becomes too tempting and she figures there's no reason why she shouldn't throw her hat in the metaphorical ring.

the app has a chat component, and elena finds that she enjoys trash-talking her peers. somewhat inadvertently she finds herself chatting with this one person, whom she thinks is a guy. they share a similar sense of humor, and don't give each other any slack, though they also help one another out. and even though she doesn't know who this guy is, she finds herself opening up to him. and he feels the same way. of course our secret guy is oliver, but it's some time before elena catches on to this.

i love this kind of secret identity story because the characters are interacting with each other on two different levels and get to see different sides of each other. when they finally put the whole picture together it's so satisfying, because they can understand one another more fully. and that's what happens with elena and oliver over the course of the story. it actually takes them a while to figure out that they've been chatting with one another. they both react pretty strongly to realizing the truth behind their chatroom personas, in so many ways, they were the last person they were expecting to be chatting with. and this is also complicated by the fact that in their real lives, there had been a thawing of the constant tension between them, so the truth feels almost like a betrayal. plus they have all this other family drama to deal with given their parents and their family history.

the best thing about any boy but you is seeing how elena and oliver's relationship develops and deepens. there are so many layers to their story and the novel also has a great cast of characters in this town, some of whom who will be great candidates for sequel stories in the series. i can't wait to spend more time in north pole, minnesota. and i've never said that about somewhere cold ever.

**any boy but you published on february 13, 2017. i received an advance reader copy courtesy of netgalley/entangled publishing (entangled:crush) in exchange for my honest review. the blog tour has been organized by chapter-by-chapter.