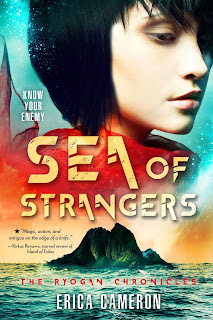 sea of strangers picks up where island of exiles left off. at sea, khya and her friends must come upon an idea that will allow them to survive the dangers ahead.

the action rarely stops, but we do get more answers to what the misireh are up to and a deeper understanding of the mythology and magic that imbues this world. because this is book two of a planned trilogy there’s still not a whole lot of resolution but i have high hopes for book three.

the relationship between khya and tessen continues to deepen, and i enjoyed the quiet moments between them, even as everything around them falls apart over and over again. what they are aiming to do feels like the impossible and yet, their perserverance, their determination makes it seem like it's within reach even as they are faced with setback after setback.

**sea of strangers published on december 5, 2017. I received an advance reader copy courtesy of netgalley:entangled publishing (entangled teen) in exchange for my honest review. keep reading for an excerpt and more information on the book... 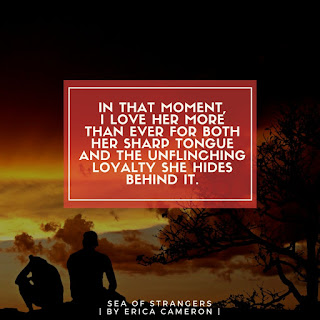 Know your enemy if you want to survive…

The only way for Khya to get her brother back alive is to kill Varan—the immortal ruler who can’t be killed. But not even Varan knew what he was doing when he perverted magic and humanity to become immortal.

Khya’s leading her group of friends and rebels into the mountains that hold Varan’s secrets, but if risking all their lives is going to be worth it, she has to give up everything else—breaking the spell that holds her brother captive and jeopardizing her deepening relationship with Tessen, the boy who has been by turns her rival and refuge since her brother disappeared. Immortality itself might be her only answer, but if that’s where Khya has to go, she can’t ask Tessen or her friends to follow.

The sight of him against the stone sparks a memory that makes my hands still. I laugh. “You know, it’s several moon cycles late, but we’re finally exactly where the entire city thought we were when we kept sneaking off.”

“I’m glad they’re finally right.” He runs his free hand up my bare thigh, his touch and his voice shaky, but it’s the wide-eyed disbelief on his face that makes my heart skip a beat. “I hoped, but I wasn’t sure it’d ever happen.”

I sit up straighter, flattening my palm against the center of his chest and watching him. “The way you’re looking at me, it seems like you’re still not sure it’s happening.”

“The good moments have been rare recently.” His hand slides over my hip and presses against the center of my lower back, drawing me down until his lips brush against mine before he whispers, “And this is unbelievably good.” 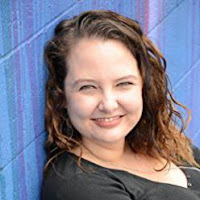 ABOUT THE AUTHOR
Erica Cameron is the author of books for young adults including the Ryogan Chronicles, the Assassins duology, and The Dream War Saga. She also co-authored the Laguna Tides novels with Lani Woodland. An advocate for asexuality and emotional abuse awareness, Erica has also worked with teens at a residential rehabilitation facility in her hometown of Fort Lauderdale.