seriously romantic: when a lady kisses a scot by tara kingston 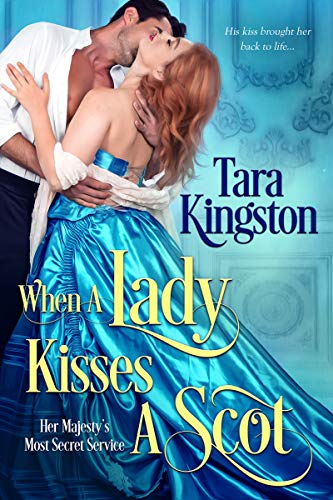 the fourth book in her majesty's most secret service series is essentially a second-chance romance wrapped into historical romantic suspense, so when a lady kisses a scot runs into one of my least favorite tropes. but in this case, our lady heroine, rose fleming, had to go into hiding after her father was murdered and her family targeted.

she escapes to america and for ten long years doesn't set foot on british soil. and never explains to the man she loved that she survived the terrible carriage accident. for his part macallister campbell doesn't begrudge the lack of trust or deception too badly. and while they don't forget their past, the story is more about the present they are living and the possibility of the future. he does understand that she made the choices she did because she
was in danger.

in fact, she is still in danger. and that's where his spy background comes in handy.

but wait, can we talk about this dude's name? macallister campbell is quite a mouthful, and while he goes by mac, it's such a freaking cliché for a scotsman. his name is essentially two last names. i don't know. i mean i'm often rolling my eyes at the names authors sometimes choose for their characters. but fo some reason, i cannot with macallister. it's really not a first name.

ok sorry, so yeah, there's a series of mysteries that the two of them work together to solve. and they reconnect and the spark is still there. and it's a romance so you know what happens.

i always kind of enjoy this era because fascination that victorians had with spiritualists and the occult just adds to the atmosphere in these stories.

**when a lady kisses a scot will publish on july 22, 2019. .i received an advance reader copy courtesy of entangled publishing (amara) in exchange for my honest review.