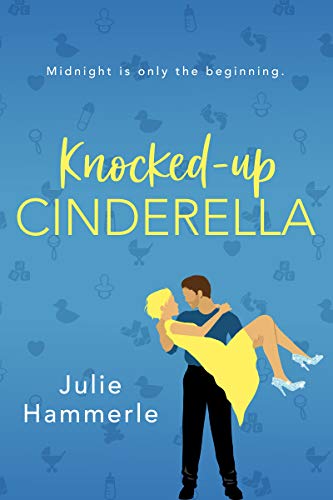 i've read hammerle's young adult books, so i was surprised to see that one of her novels was part of entangled's august line launch. but she transitions seamlessly to adult romance. knocked-up cinderella is basically what you get when knocked up (the movie) is mixed with a nancy meyers movie.

forty-year-olds aren't any better at handling unplanned pregnancy than millenials are. i don't know if that's a good or bad thing. anyway, here ian donovan has a reputation. he's upfront that he's not in it for the long haul. women can expect to have him for one night and then nada. but for some reason, erin sharpe seems to be the exception to that rule. and he's not too sure he knows how to handle it. and he is crap at admitting it.

and so when erin winds up pregnant after a one-night stand, she expects nothing from him. and she'd be okay if he offered nothing. the problem is that ian keeps randomly showing up. he keeps coming back to her in ways that she doesn't quite understand. it would be one thing if ian were true to what he advertised himself as, but he keeps showing these hints of more and it makes her crazy.

there's a lot of back-and-forth in this book, highs-and-lows, but in the end, it's a really sweet story of two people finding their way together. i was already pretty much a one-clicker on hammerle's work, this just confirms that it doesn't matter the genre.

**knocked up cinderella will publish on november 12, 2018. i received an advance reader copy courtesy of netgalley/entangled publishing (august) in exchange for my honest review.