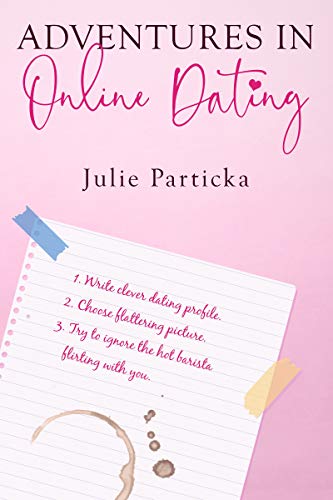 when coffee shop owner marshall calloway finally gets a chance to try for a date with alexa mcintyre in adventures in online dating he's bummed to realize that she doesn't take him seriously. marshall is ten years younger, has a penchant for wearing geeky t-shirts and purple converse sneakers, and lives his life seeming to fly by the seat of his pants.

alexa was already married to someone who hated to be tied to plans. but three boys later she couldn't envision that kind of unsettled existence anymore. she wanted a home she could call a home. a salary to count on. she wanted to be in control of what happened to her family. but when her oldest boy starts to act like a teenager she starts to believe that maybe a man's steadying influence would be good for him.

as an actuary, alexa's life is about numbers. and she has an algorithm better than any those online dating apps have created. so she creates a spreadsheet and kicks off a plan, that involves 20 minute dates at the coffee shop for a three hour period. needless to say marshall isn't into this plan.

as every 20-minute date is more obviously a bust, alexa can't stop her thoughts from straying to the guy behind the counter. eventually they give in to their crazy chemistry, and it could be good, except alexa's brain doesn't stop getting in the way.

she's actually super horrible to marshall. and listen, sometimes i find myself falling into that trap where you hold women to higher standards and so i work really hard to think well of female characters in order to avoid those weird implicit biases we are assaulted with all the time. but this time, alexa is really awful, and he puts up with a lot of crap from her and for her. when she makes her gesture, in some ways it doesn't feel like quite enough. but the guy is head over heels, so it's nice to see them find happiness.

**adventures in online dating will publish on november 12, 2018. i received an advance reader copy courtesy of netgalley/entangled publishing (august) in exchange for my honest review.