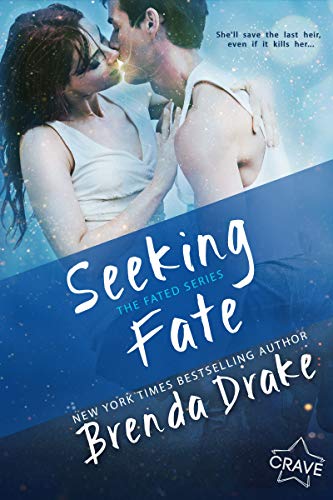 the third book in the fated series, seeking fate, finds the fate changer, daisy layne, looking for the last of the van burens. his fate is tied to hers. his death will lead to hers. so she makes a trek across europe evading the thorns, a crazed religious sect out to kill fate changers, with her internet friend/european guide/love interest, andrei.

andrei knows what daisy is. and even though it can be dangerous to be close to her, he is already half in love with her when they first meet. too bad they both feel awkward without the safety of a computer monitor between them. it takes a while for them to figure out how to be with one another in person. that they are on this crazy journey only adds to that.

this book was enjoyable, but the big twist is given away too early. i'm pretty sure most readers figure out at the same moment i did who the last van buren heir really is. and then there was the unrealistic way these two kids traveled across europe. not just within cities, they moved across several countries. partly the issue is that andrei and daisy would identify where they'd have to go next and would talk about transportation but then the next chapter would start and they'd arrived in whatever city it was that they needed to be. this just didn't feel real. and i felt like we missed opportunities for the characters to deepen their relationship because we don't get to see them in these confined moments.

nonetheless, this is a fun adventure, and a nice conclusion to the series.

**seeking fate will publish on september 3, 2018. i received an advance reader copy courtesy of netgalley/entangled publishing (crave) in exchange for my honest review.