seriously romantic: accidentally in love with the pilot by teri anne stanley 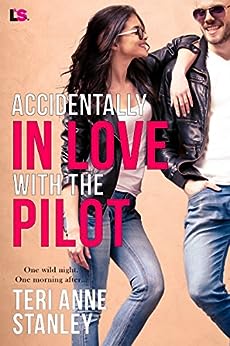 megan shuttlekrump, is the adopted daughter of a family of circus act performers. kind of like cousin marilyn in the munster family, megan is the straight character keeping everyone in line. accidentally in love with the pilot opens with a surprise party for megan's birthday, and ben rutledge is roped into delivering the cake. ben who is introverted and shy and overwhelmed by the intensity of her family, but he's intrigued by megan.

and a drunken night at the bar ends up with a quickie vegas wedding that neither of them remembers. and while they try to piece together what happened that night, the only other thing they know for sure is that the condom broke. deciding to stay married for the length of ben's military leave while they figure out where they got married and if they are pregnant seems to be the most logical step.

but soon playing house and being together feels so real. and both of them are afraid to admit that it's what they want. finding their words is no easy task, but the actions that speak louder are all right there. it's just that megan is too afraid to believe that ben loves her, just like she's afraid to admit that she worries that if she isn't needed by her family they don't love her anymore. there's a lot of deep-seated insecurity there, but megan isn't a doormat. she just can't stop herself from being useful to everyone. it's an expression of love for her, and when ben doesn't need her to be useful, it's both a relief but also incredibly scary. their love story is enjoyable and sweet.

**accidentally in love with the pilot will publish on august 13, 2018. i received an advance reader copy courtesy of netgalley/entangled publishing (lovestruck) in exchange for my honest review.