simply all about blindsided - a release blitz 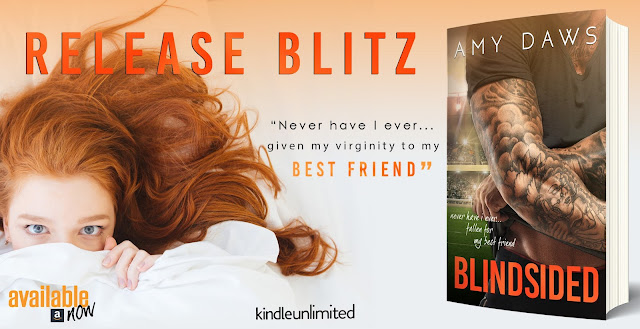 What happens when an almost thirty-year-old virgin agrees to let her Scottish footballer best friend give her some lessons in seduction?

Midfielder Maclay “Mac” Logan is a loud-mouthed, tattooed ginger content with focusing on football. But when an adorably-freckled seamstress comes barreling into his life, he finds Netflix-And-Bickering with her to be his new favorite pastime.

Freya Cook is used to being the invisible woman with a needle and thread, offering cheeky punchlines as she helps dress London’s finest. She’s plus-sized in body and spirit, and other than her friendship with Mac, talking to the opposite sex is one skill she never mastered.

However, after one innocent game of Never Have I Ever, Mac offers to play Love Coach for Freya.

What neither of them see coming are the feelings that develop when the clothes come off.

Now they’re both about to learn the biggest lesson of all: Don't fall in love with your best friend.

The buzzer goes off, indicating we can go through the door, and my ears swell with heat. “I feel like I could shit out three kittens right now.”

Mac bursts out laughing. “What the hell does that mean?”

I turn an accusing glare at my friend. “I’m nervous, that’s what it means. My ears are on fire because this isn’t my scene. My scene is fuzzy pyjamas, a sewing machine, my cat, and Netflix. You are the cause of my gastrointestinal issues at the moment. Therefore, it’s important for you to know that you and I are in a fight.”

He shakes his head as he leads me up the single flight of stairs to the flat entrance. “That’s the fourth fight we’ve been in this week. I must be trying to break my record.”