something from the archives: chocolate velvet - part 6 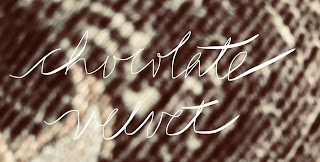 “This isn’t a good plan.” Max had been arguing the point for hours now. I’m not sure if any of us were even paying attention anymore. We’d spent all morning in the parking lot watching Max pace back and forth trying to sway someone over to his side. Unfortunately for Max, we were all in agreement.

“Maxwell, shut it.” Michael finally yells, “We’re going to do this, it was always going to happen. Better sooner than later.”

“They’re right Max, we have to do this. And we should do it now. The longer we stay here the more danger we’re in.” Isabel adds.

“We’ll find our way back to each other Maxwell,” adds Michael. “Right, Izzy?”

“Fine. How do we divide things?” Max spits out.

“Max, you and Izzy should take the van. Michael has his bike—”

“And you and Liz, what will you take?” interrupts Max.

“Just our things, we don’t need anything else.” Liz replies.

“Chica, are you sure?” asks Maria.


Liz sat patiently on Kyle’s bed, waiting for him to emerge from the closet. He’d claimed he had something in there he needed her to see. Because he’d been acting so strangely recently she thought that it was best to humor him.

“Found it,” he shouted triumphantly as he poked his very disheveled head out the closet doors. “I saw this a month ago at the town fair and it reminded me of you.” He held out a long, thin box wrapped in blue and red striped paper.

“I just wanted you to have it.”

Liz looked at the precisely wrapped package a moment and slowly began to undo the paper. She was careful not to tear it as she revealed the cardboard box it covered. “Kyle,” she said, “what’s going on with you? You’ve been acting strange all week, and we must be celebrating something. Otherwise why would you have kept this wrapped up for a month?”

“Will you just open it and not think too much about the whys and wherefores! God, Liz, trust you to ruin a perfectly nice gesture.”

“I’m not trying to ruin anything. I just want to understand what is going on. I know something is happening with you. Why don’t you trust me? Why won’t you talk to me?” Liz pulled open the box, nestled into the white cotton was a silver bracelet with a round medallion at its center etched on it was a soaring eagle flying into storm clouds in traditional Hopi design. Stunned by the bracelet’s simple beauty she just burst into tears, overwhelmed by the argument, by her confusion, by her fear for their relationship.

Kyle held himself away from her a moment, before forcefully pulling her into his arms. “I’m sorry Liz. I didn’t mean to yell. I just—”

“This is so beautiful. I wasn’t trying to ruin the moment,” Liz spoke through her tears.

“I know baby, I’m—the thing is I know I’ve been acting weird, and that I haven’t been here for you lately. And I wasn’t ready to talk to you about this before, but I am now.”

“What’s going on? You’re scaring me.”

“About two months ago I got a letter from my mom—”

“Well, I didn’t read it for a while. I couldn’t. I mean she left me behind. She walked out that door with her bags packed and no goodbyes. How dare she try to come back into my life so easily?” Kyle sighed.

“Well, I carried it around. And the thing is by doing that it got heavier. I could feel it all the time in my back pocket, it was as if the damn thing was calling out my name. That’s why I’ve been so distracted. I’ve been thinking about that damn letter.

“So, I read it last night. I was upset with everything that had been going on in my life lately. We’d had that stupid argument at school, and I realized that by not reading the letter I was letting it eat away at me.”

“Nothing,” Kyle snorted, “all this grief, and she just wrote a note to ask how I was doing. No explanations, no apologies, all this time I’d been carrying it around, and it could never be what I wanted it to be.”

“And what was that?” Liz asked softly.

“I wanted her to want me in her life, as desperately as I want her in mine. I want her love, Liz, and I don’t think she has that in her to give to me. But the letter taught me something. I have to let her go. And I have to hold on to what really matters. And that’s why I’m giving you that bracelet today. Because the truth is you mean everything to me. I love you and I wanted you to know that.”


Michael, Maria, Liz, and I watch as Max and Isabel pull the van away from the parking lot. Saying goodbye was a lot harder than I thought it would be. We watch as they round the curve in the road, each of us wondering if we really ever expected to meet again.

“So this is it,” says Michael.

Strangely, Michael and I have always understood each other. We’re probably more alike than we will ever care to admit. Extended deep-felt conversations were never going to occur, and we knew we needed to be on our way before the girls settled into one of those, although with Maria and Liz talking off to the side there was no telling how long we’d be standing there.

“How are you and Liz planning to get around? Ria and I have the bike…”

“Don’t know. Can’t say that I thought through a lot of the details.”


We stand watching the girls until Michael finally has enough of it and yells out, “Maria, that’s it. We’re leaving.” He then pulls Liz into a bear hug, shakes my hand, and stalks off to rev his bike. Maria hugs and kisses us both in a hurry and joins him. Together Liz and I watch them leave too.